Recently, I stumbled upon this wonderful tag while scrolling through the feed of the lovely Cailin @ Rose Petal Pages! You can find her answers for this tag here.

The blog of this tag’s original creators no longer exists, but if it did, you would find it here.

Now, before we begin, I’d like to issue a full disclaimer. I have things I like and dislike about both of these series. If you are a mega-fan of ACOTAR and/or TOG who literally adores everything about them, then don’t be offended if I disagree with some of your views! It’s in no way a personal attack on you! We good? We good.

With that being said, let’s dive right in! 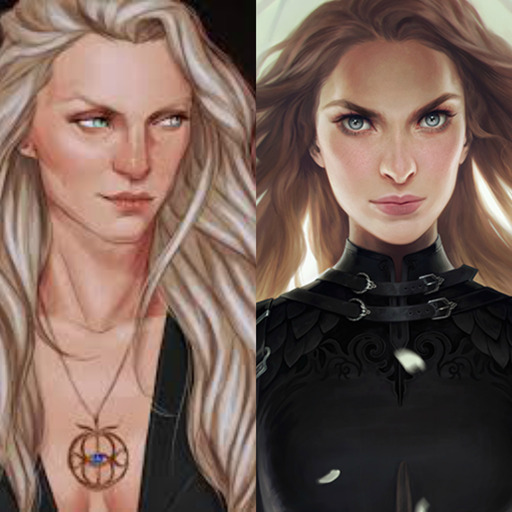 I’m going to have to go with Aelin on this one. While both of these characters are strong, capable young women, I personally feel like Aelin’s character goes through way more development than Feyre’s ever does. By ACOWAR, I actually felt like Feyre became less interesting than she was in Books 1 and 2, which is sort of weird. Anyways, I liked how as the story progressed (especially in HoF and QoS) Aelin became a wiser and more mature character than she’d been previously.

Er, this is hard because I literally despise both of these guys. Yep, yep, here’s the part where the entire Sarah J. Maas fandom raids my house and murders me (jk Sarah J. Maas fandom pls don’t do that). What can I say? I just find nothing desirable about either of these characters. Well, I guess if I had to choose I would go with Rhysand, just because he’s slightly less of a scumbag than Rowan is. I’m sorry but there’s NO ONE WORSE THAN ROWAN. If you want to see the post that is solely dedicated to my hate for Rowan, please click this link.

3. Better First Book: Throne of Glass or A Court of Thorns and Roses?

ACOTAR wins again! I actually really enjoyed both of these first books, but I feel like I found the characters in ACOTAR more likeable than the ones in TOG. I know that I previously said that I liked Aelin more than Feyre, but in the earlier TOG books that wasn’t so true. Aelin started out as an obnoxious, cocky brat who didn’t really have any positive qualities about her. But, like I said before, as the story progressed, she grew and matured as a character and became a more likeable protagonist.

Yet since we’re talking about first books, ACOTAR wins.

This is irrelevant to the prompt, but is it just me or does this illustration of Nesta look like Kristin Bell? Yes, no, maybe so?

Anyways, THIS IS SUCH A HARD QUESTION!!! I love these characters with all of my heart since they’re both so kickbutt, cool, and strong-willed. Plus, they take orders from nobody, and we all love ourselves a fiery, independent female character! But, at the end of the day, I think I’m going to have to go with Manon because, well, it’s MANON. I still have tons of love for Nesta, but honestly, I appreciate how Manon supports and unites with other women, ’cause isn’t that something we need to see in YA literature more often? Again, Nesta’s great, but I think she needs to be a little more appreciative of her sisters… After all, Feyre pays her frickin’ rent!

Hmm, I think I’m choosing Aelin’s court for this one. I really don’t know why… It’s probably just because my babies Manon and Chaol are in it. I suppose I don’t feel much of a pull towards Rhys’s inner circle for some inexplicable reason.

6. Favourite Female Friendship: Aelin and Lysandra or Feyre and Mor?

While I like Mor’s character more than Lysandra’s, I think Lysandra and Aelin’s friendship is more complex and developed than Mor and Feyre’s. I mean, think about it: Mor and Feyre were kind of insta-friends, which is great and all, but Lysandra and Aelin’s friendship went through so much growth and development that made it considerably interesting to read about. Throne of Glass wins!

Lol, I couldn’t find any King of Adarlan art, so there you go!

Anyways, if we’re talking about the most well-written villain, then I hands down vote for Amarantha. From the very first time she was mentioned in ACOTAR, she sparked a sort of eerie dread in me, and that emotion lasted throughout the whole series. I think that being able to create a villain that draws such fear out of readers is a really cool skill for an author to have, so well done, Sarah J. Maas! As for the King of Adarlan, I don’t know, I guess I just never took him very seriously. He lacked complexity, and in my opinion, that’s a really important thing for a fictional villain to have.

I was originally going to go with Prythian for this one, but then, after some thought, I changed my mind. I feel like in Throne of Glass, the setting has always been such a significant part of the story, which is something I find you don’t always see in YA. With all the travelling the characters do and all the wars and battles that occur, I feel like we get to learn a lot about Erilea and its history, which is something I can’t say for Prythian.

CHAOL. If you chose Tamlin, then I seriously question your sanity (just kidding, if you are a defender of Tamlin, I fully support that… kind of).

10. Better Novella: The Assassin’s Blade or A Court of Frost and Starlight?

This is quite a difficult question because I didn’t really enjoy either of these titles. But if I had to choose, I suppose I’d go with The Assassin’s Blade. Even though TAB was kind of a “meh” read for me, it was 10000 times better than the major disappointment that was A Court of Frost and Starlight. I’m sorry, but ACOFAS was absolutely HORRENDOUS. The plot was nonexistent and some of my favourite characters (Mor, Nesta, Lucien) were only mentioned once or twice. I mean, I like Feyre, but I feel like it’s time to move on from her POV, at least for a little while. Which is why I’m so hyped for Book 4 in the ACOTAR series because it is rumoured to be told in Nesta’s perspective! But anyways, Throne of Glass wins (again)!

A Court of Thorns and Roses: 3

I can’t say I expected these results! I actually thought that ACOTAR would win, but I seem to have been very wrong.

Despite what my final totals say, I honestly like both of these series pretty much equally. They have their flaws, but all in all, they are both fast-paced, action-packed, and enjoyable series!

Well, that’s it for now! If you are a fan of Sarah J. Maas books, then consider yourself tagged! I hope you have as much fun answering these prompts as I did!

Thanks for reading this post everyone! Have a wonderful week!

2 thoughts on “Throne of Glass vs. A Court of Thorns and Roses Book Tag!”