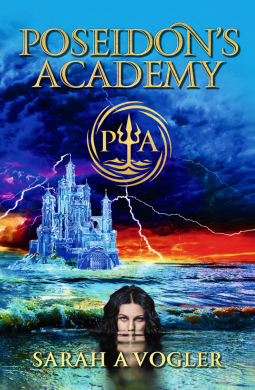 Trigger Warnings: With it being a middle-grade novel, there were (in my perspective) limited triggering details within Poseidon’s Academy. Here are the few that I found, though: Descriptions of food, minor injuries/wounds, the death of a parent, blood, punching.

Getting sucked into a whirlpool, sleeping in monster-infested woods, and battling psycho sea-nymphs was not how Hailey planned to spend her first year of high school. But when you’re the only Zeus in the world, life tends to get a bit complicated…

The Great Battle saw the world changed forever when humans killed the gods and absorbed their powers. One power was coveted above all others: Zeus’s. Thirteen-year-old Hailey Woods is the first Zeus in over a century. Unlike everyone else, she hates her powers because of an ancient prophecy that claims a Zeus will have to save the world someday.

Hailey doesn’t want to save the world. She wants to be a normal teenager, whose biggest dilemma in life is deciding what to eat for lunch, rather than training to become the ultimate weapon. Poseidon’s Academy, an underwater palace where her powers don’t work, was meant to give her that opportunity. But when she arrives, she discovers the sea-nymphs living there are plotting to resurrect the gods, and Hailey must find a way to stop them before they can enact the prophecy.

So much for normal!

ARC provided by NetGalley in exchange for an honest review.

While Poseidon’s Academy was by no means “bad”, I can’t say that it was my cup of tea.

I found that it lacked some of the things a well-written book should have. For starters, world-building.

The author does a decent job of introducing readers to the most significant elements of the setting, but there is still something to be desired when it comes to the information given about the world’s history and attributes. I just wish the author would have provided more details on how the humans receive their powers and why they receive the powers of certain gods… Speaking of which, we are told that when the Gods were defeated, thousands of years before Hailey (the protagonist)’s time, their powers showered down upon humans and thus led them to possess divine magic of their own… This part of the book just triggered a lot of questions within me. Like, if the Gods’ powers were distributed among mortals thousands of years ago, then how did our main character (who was not alive then), get hers? And Are certain powers passed down through blood? Needless to say, I still have plenty of questions that were not answered in the book.

Moving on, I also thought the characters in this book were somewhat one-dimensional. I never really connected with Hailey, the main character, and while it pains me to say this, she was a pretty bland protagonist in my perspective. She didn’t have many intriguing qualities, nor did she have any depth or complexity. I didn’t find any of the supporting characters very interesting either, which is quite unfortunate because unique and fascinating characters majorly contribute to a book being enjoyable to read (at least in my experiences).

However, there were certainly some elements of this book that I appreciated immensely. Poseidon’s Academy is a fun, fluffy read that made me miss the middle-grade genre due to its bright and colourful narration. Sarah A. Vogler does an excellent job of painting vivid images in your head of all the fantastical places, things, and creatures that appear within this book.

All in all, though I didn’t love Poseidon’s Academy, I would definitely recommend it to fans of Percy Jackson and/or Harry Potter who are looking for a light and easy read that features magical powers, mythical beings, and more!

Thank you to NetGalley, Sarah A. Vogler, and Aurora House Publishing for sending me an eCopy of this book!