WWW Wednesday is a weekly meme hosted by Sam over on Taking on a World of Words!

Synopsis: A world with no hunger, no disease, no war, no misery: humanity has conquered all those things, and has even conquered death. Now Scythes are the only ones who can end life—and they are commanded to do so, in order to keep the size of the population under control. Citra and Rowan are chosen to apprentice to a scythe—a role that neither wants. These teens must master the “art” of taking life, knowing that the consequence of failure could mean losing their own. Scythe is the first novel of a thrilling new series by National Book Award–winning author Neal Shusterman in which Citra and Rowan learn that a perfect world comes only with a heavy price.

My Thoughts: I have mixed feelings about this one. On one hand, the world is really interesting and the concept behind the scythes and their gleanings is so well thought out. On the other hand, the pacing is slow, the characters are flat, and the romance is a complete waste of time.

Synopsis: The kingdom of Hálendi is in trouble. It’s losing the war at its borders, and rumors of a new, deadlier threat on the horizon have surfaced. Princess Jennesara knows her skills on the battlefield would make her an asset and wants to help, but her father has other plans. As the second-born heir to the throne, Jenna lacks the firstborn’s–her brother’s–magical abilities, so the king promises her hand in marriage to the prince of neighboring Turia in exchange for resources Hálendi needs. Jenna must leave behind everything she has ever known if she is to give her people a chance at peace. Only, on the journey to reach her betrothed and new home, the royal caravan is ambushed, and Jenna realizes the rumors were wrong–the new threat is worse than anyone imagined. Now Jenna must decide if revealing a dangerous secret is worth the cost before it’s too late–for her and for her entire kingdom.

My Thoughts: I always feel bad giving arcs low ratings, but I really disliked this one. The main character annoyed the heck out of me and all of the supporting characters were just plain boring. All of the plot devices were cliche and overused, and the many tropes in the book were used carelessly and unoriginally. Sadly, Shielded was not my cup of tea.

Cinderella is Dead by Kalynn Bayron

Synopsis: It’s 200 years after Cinderella found her prince, but the fairy tale is over. Teen girls are now required to appear at the Annual Ball, where the men of the kingdom select wives based on a girl’s display of finery. If a suitable match is not found, the girls not chosen are never heard from again. Sixteen-year-old Sophia would much rather marry Erin, her childhood best friend, than parade in front of suitors. At the ball, Sophia makes the desperate decision to flee, and finds herself hiding in Cinderella’s mausoleum. There, she meets Constance, the last known descendant of Cinderella and her step sisters. Together they vow to bring down the king once and for all–and in the process, they learn that there’s more to Cinderella’s story than they ever knew . . . This fresh take on a classic story will make readers question the tales they’ve been told, and root for girls to break down the constructs of the world around them.

My Thoughts: THE BOOK I NEVER KNEW I NEEDED! Cinderella is Dead was absolutely amazing, I don’t even know what to say. It’s easily my favorite Cinderella retelling out there. The strong message of feminism in the story is powerful, but not overly forceful. This book is just fantastic and you NEED to read it!

The Deep by Alma Katsu 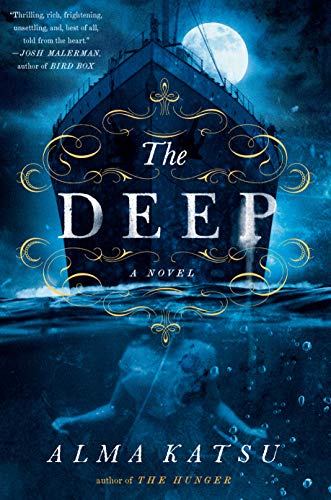 Synopsis: Someone, or something, is haunting the ship. Between mysterious disappearances and sudden deaths, the guests of the Titanic have found themselves suspended in an eerie, unsettling twilight zone from the moment they set sail. Several of them, including maid Annie Hebley, guest Mark Fletcher, and millionaires Madeleine Astor and Benjamin Guggenheim, are convinced there’s something sinister–almost otherwordly–afoot. But before they can locate the source of the danger, as the world knows, disaster strikes. Years later, Annie, having survived that fateful night, has attempted to put her life back together. Working as a nurse on the sixth voyage of the Titanic‘s sister ship, the Britannic, newly refitted as a hospital ship, she happens across an unconscious Mark, now a soldier fighting in World War I. At first, Annie is thrilled and relieved to learn that he too survived the sinking, but soon, Mark’s presence awakens deep-buried feelings and secrets, forcing her to reckon with the demons of her past–as they both discover that the terror may not yet be over.

My Thoughts: I find the tragic sinking of the Titanic equal parts disturbing and fascinating. I think that this book sounds really interesting, but both the eBook and physical book are so  expensive! And obviously I can’t go to the library right now (thanks, COVID) 😬 Well, I’m hoping that somehow I can get my hands on The Deep this week, as I really want to read it!

Synopsis: When fourteen-year-old Padmé wins the election for Queen of Naboo, she adopts the name Amidala and leaves her family to rule from the royal palace. To keep her safe and secure, she’ll need a group of skilled handmaidens who can be her assistants, confidantes, defenders, and decoys. Each girl is selected for her particular talents, but it will be up to Padmé to unite them as a group. When Naboo is invaded by forces of the Trade Federation, Queen Amidala and her handmaidens will face the greatest test–of themselves, and of each other.

My Thoughts: This one doesn’t come out until June, but I LOVE Padmé so I had to include it in this WWW post. I love the Star Wars movies, so I’m always skeptical of the novel adaptations. But hopefully I end up loving this one!

WHAT ARE YOUR WWWS? I’D LOVE TO KNOW!