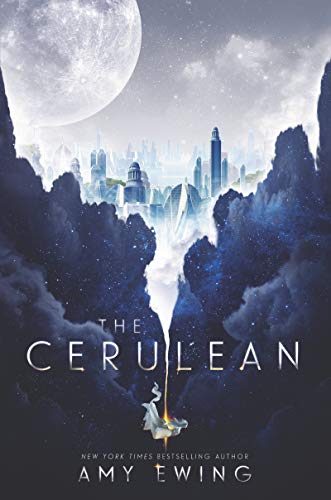 Sera Lighthaven has always felt as if she didn’t quite belong among her people, the Cerulean, who live in the City Above the Sky. She is curious about everything—especially the planet that her City is magically tethered to—and can’t stop questioning things. Sera has always longed for the day when the tether will finally break and the Cerulean can move to a new planet. But when Sera is chosen as the sacrifice to break the tether, she feels betrayed by everything in which she’d been taught to trust. In order to save her City, Sera must end her own life. But something goes wrong, and Sera survives, ending up on the planet below in a country called Kaolin. Sera has heard tales about the dangerous humans who live here, and she quickly learns that these dangers were not just stories. Meanwhile, back in the City, all is not what it seems, and the life of every Cerulean may be in danger if Sera is not able to find a way home.

The fact that this book has so many DNFs and low ratings on Goodreads truly baffles me. I really enjoyed The Cerulean, despite having come into it with very low expectations.

I picked up this book is because I had received it in a bookish subscription box some time ago, and I didn’t want my money to go to waste by not reading it. After seeing its average rating of 3.51 stars on Goodreads, I was quite apprehensive… I tend to gravitate towards books that have an average of at least 4 stars (then again, who doesn’t?). But I’m really glad that I gave this one a shot because it was a wonderful read!

The concept behind The Cerulean is fantastically unique and like nothing I’ve ever read before. The world is vivid and imaginative, full of breathtaking imagery and lyrical descriptions. This book is marketed as fantasy, but it almost reads off as science fiction due to all of the incredibly well thought out details put into the setting. It’s amazing how this book manages to be lush and descriptive with its beautiful world-building, but also fast-paced and gripping at the same time. With fantasy, I usually find it’s one or the other, but The Cerulean is a perfect balance of both!

Additionally, the writing itself is beyond beautiful. Amy Ewing’s writing style is absorbing and poetic. I was completely entranced by every sentence she wove together, resulting in me being unable to put the book down! Ewing’s writing is utterly exquisite, and I couldn’t get enough of it.

Another aspect of the book I couldn’t get enough of: the characters! All of the main characters stood out as interesting and unique, but it never seemed like they were “trying too hard” if you know what I mean. For example, Agnes, one of the protagonists, was a strong female heroine, but her toughness wasn’t shoved in my face. You know those female MCs where it’s stated over and over how strong they are? Not here. It wasn’t even Agnes’s sassiness or snarkiness that made her a badass female lead. It was her devotion to others and determination to do the right thing that really made me fall in love with her character. The same thing can be said about our other female lead, Sera. In the book, she was forced into horrific circumstances, but nothing stopped her from remaining strong, spirited, and determined.

I find it incredibly note worthy that every supporting character in the book was just as fleshed out as the main characters. For instance, Kandra, Sera’s mother, was, in my opinion, one of the most well developed characters in the story. Seeing her grief and devastation after the loss of her daughter was both heartbreaking and impactful. Even though she played a somewhat small part in the story, her character arc was one of my favorites to read. I’m hoping to see more of Kandra in the next book in the series!

Overall, The Cerulean deserves so much more love! It’s a beautifully written book with magnificent world-building and memorable characters. In a genre that likes to repeat itself, it’s nice to have something fresh and new, like The Cerulean. I’m looking forward to reading the sequel!

4 thoughts on “Review: The Cerulean by Amy Ewing”