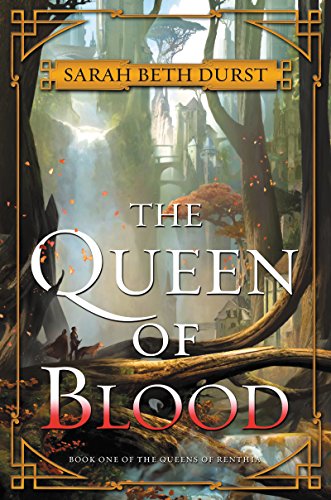 Everything has a spirit: the willow tree with leaves that kiss the pond, the stream that feeds the river, the wind that exhales fresh snow . . .

But the spirits that reside within this land want to rid it of all humans. One woman stands between these malevolent spirits and the end of humankind: the queen. She alone has the magical power to prevent the spirits from destroying every man, woman, and child. But queens are still just human, and no matter how strong or good, the threat of danger always looms.

With the position so precarious, young women are chosen to train as heirs. Daleina, a seemingly quiet academy student, is under no illusions as to her claim to the throne, but simply wants to right the wrongs that have befallen the land. Ven, a disgraced champion, has spent his exile secretly fighting against the growing number of spirit attacks. Joining forces, these daring partners embark on a treacherous quest to find the source of the spirits’ restlessness—a journey that will test their courage and trust, and force them to stand against both enemies and friends to save their land . . .  before it’s bathed in blood.

The Queen of Blood by Sarah Beth Durst is an utterly enthralling novel with a vivid fantasy landscape. The language in this book, the imagery, the emotions it made me feel, were all spectacular. I felt like I fell into the book each time I opened it, if that makes sense.

The thing that makes this book stand out amongst other high fantasy novels is its fascinating setting and intricate magic system. We enter Renthia, an enchanting world where humans live in uneasy peace with the spirits around them. Though the spirits’ natural instinct is to destroy humankind, they are controlled and restrained by the Queen of Renthia. But the Queen’s power over the spirits appears to be declining, leaving the land in a perilous situation.

Have you ever read a book where the setting feels like a character itself? That’s how I felt about Renthia. The land was so alive, as it was the spirits that made the plants grow, the rain fall, the wind blow and so on.

Daleina, the main character in this story, was unlike any other protagonist I’ve come across in a fantasy novel. In most books, we see the main character get underestimated at first. Sure, she’ll struggle initially, but soon everyone will find out how powerful she is! That’s not how Daleina’s story goes. She was so much more than just an underdog. Compared to other girls with the ability to command spirits, Daleina was considerably weak. She was no strong summoner or “special snowflake”, and she had to work extremely hard to barely pass the exams that should have been effortless for a commander of spirits. She recognized that she would never be as powerful as the other girls training to summon spirits, but not once did she embrace defeat. It’s so nice to see such a complex and refreshing protagonist in a fantasy setting.

All of the supporting characters in this story were just as interesting as Deleina. Queen Fara, for example, was a very intriguing, well developed character. I never knew whether to view her as a hero or a villain, and I love that the author wrote her character out to make us readers feel so torn!

Merecot was another wonderful character (she might have even been my favorite). I loved her bluntness and confidence in herself, and though her appearance in the book was somewhat brief, I enjoyed it nonetheless. I really hope we get to see more of her in the next books in the series, as her character arc sort of ended on a cliffhanger.

Overall, The Queen of Blood is an enchanting start to what I’m sure is bound to be an incredible trilogy. If you’re into lush, atmospheric fantasies, this is definitely the book for you!

17 thoughts on “Review: The Queen of Blood by Sarah Beth Durst”