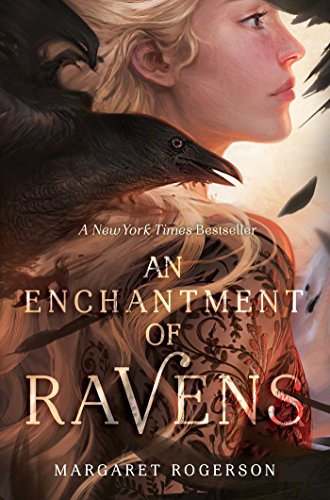 Isobel is an artistic prodigy with a dangerous set of clients: the sinister fair folk, immortal creatures who cannot bake bread or put a pen to paper without crumbling to dust. They crave human Craft with a terrible thirst, and Isobel’s paintings are highly prized. But when she receives her first royal patron—Rook, the autumn prince—she makes a terrible mistake. She paints mortal sorrow in his eyes—a weakness that could cost him his life.

Furious, Rook spirits her away to his kingdom to stand trial for her crime. But something is seriously wrong in his world, and they are attacked from every side. With Isobel and Rook depending on each other for survival, their alliance blossoms into trust, then love—and that love violates the fair folks’ ruthless laws. Now both of their lives are forfeit, unless Isobel can use her skill as an artist to fight the fairy courts. Because secretly, her Craft represents a threat the fair folk have never faced in all the millennia of their unchanging lives: for the first time, her portraits have the power to make them feel.

Wow. An Enchantment of Ravens disappointed me on so many levels. I went into it expecting it to be a five star read, and it ended up being a two star one. I guess I can only blame myself for having such high expectations, but I can’t help but feel extremely ripped off.

The book started off so promising. The idea behind the story was brilliant. Our protagonist, Isobel, is an esteemed portrait artist in the land of Whimsy. Isobel paints portraits of the fair folk (the fae, basically) in exchange for enchantments in the form of protection for her family. Isobel makes a fatal mistake when she paints mortal sorrow in the eyes of Rook, the autumn prince. Furious, the fae prince whisks Isobel away to stand trial for her crime.

As I said before, this sounds like a set-up for an exciting, action-packed adventure. But that’s where the book fails to deliver.

The first 50 or so pages of the book start off strong. We meet Isobel, a seemingly strong-willed and intelligent protagonist who is unconditionally loyal to her family. For the brief part of the book where she was actually likable, I thought Isobel was a great female heroine. But when she meets Rook, her eventual love interest, things start going downhill very quickly.

Let me give you some advice: If you don’t like the insta-love trope, do not, I repeat, DO NOT, pick up this book. You’ll only waste your time. Because as soon as Isobel meets Rook, she falls head over heels in love with him (even though he’s an arrogant scumbag) and loses any sense of levelheadedness she previously had. Congratulations, Margaret Rogerson, on managing to completely butcher a character within less than 20 pages. Here’s your trophy: 🏆

I wish I could say that there were redeeming characters that made up for a protagonist who completely lost her wits the moment she got all starry-eyed over a guy, but, alas, there were not. As I mentioned before, Rook was a cocky douche who had no discernable personality traits other than his broodiness and arrogance. There were a few other supporting characters in the story, but none were developed enough for me to have a solid opinion about them.

Even if the characters were likable, I’m nearly positive that I still wouldn’t have enjoyed this book. The story as a whole just failed to interest me after page 50ish, when everything went south.

You see, after Rook basically kidnaps Isobel, the story goes in a weird direction. Actually, it doesn’t really go in any direction at all because NOTHING HAPPENS. The thing is, An Enchantment of Ravens is a “journey book”, and I doubt I would’ve picked it up had I known that from the get-go. The “plot” mainly consists of Isobel and Rook traveling from place to place and meeting occasional obstacles on the way, which usually involve Rook saving the day and Isobel cowering in the corner like your stereotypical YA damsel in distress. What the hell, book?

Not only that, but the pacing is SO SLOW. Sometimes I would pick up the book and fail to get through FIVE PAGES without wanting to put it down. And it’s less than 300 pages! Normally I read books of that length in one sitting! UGHHHHHHH.

Before I wrap this review up, I need to address something that has been bothering me a lot lately: the constant comparison between this book and ACOTAR! It’s honestly offensive. The two books are nothing alike! ACOTAR is by no means my favorite book ever, but grouping it with this monstrosity is something I cannot tolerate. Yes, ACOTAR may be cheesy at times and YES, it is full of tropes, but at least those tropes are written into the story in a somewhat original way. In An Enchantment of Ravens, the tropes are used so carelessly that it’s actually laughable. The insta-love between Rook and Isobel is so cringeworthy. They literally declare their undying love for each other halfway through the book, after no romantic development at all! If that doesn’t make you cringe, I don’t know what will.

The only reason why I didn’t give this book one star is the world-building. Obviously, it didn’t compensate for the story’s many faults, but I’ll give Margaret Rogerson this: her world-building is excellent. I thought her interpretation of the fae was pretty incredible. I liked that they weren’t just “perfect” beings… They had flaws under their glamours, and their inability to feel emotion and really live made them envious of humans. I thought this was a quite interesting approach for Rogerson to take, as it is typically the humans who are jealous of the fae, not the other way around.

But don’t get me wrong! Just because the world-building in this book was great, DOES NOT mean it was good by any means. The 2D characters, poorly developed romance, and slow-moving plot all make for a pretty terrible story.

So, in conclusion, this book was a complete waste of my time and money (yes, I actually bought a physical copy of this book because I was so confident that I would love it. Now it sits on my shelf menacingly, a constant reminder of how stupid I was to have not read its reviews before purchasing it).

There’s really not much else to say about An Enchantment of Ravens, other than that it was huge letdown (oh wait… I’ve already said that like a thousand times). It really says something about a book when the best part about it is the cover… (Honestly I’ve roasted the sh*t out of this book so many times in this review, I’m going to hell).

Overall, it’s obvious that An Enchantment of Ravens was NOT for me. I really wanted to love it, but it ended up being a crushing disappointment. What I find most unfortunate is that it had such great potential that just failed to materialize. I wish I could say I’d recommend this book, but sadly, I can’t.

(Irrelevant, BUT: I still kind of want to read Margaret Rogerson’s most recent book, A Sorcery of Thorns. I know, I know, I’m probably just setting myself up for disappointment, but it gets way better reviews than An Enchantment of Ravens, so maybe I should give Margaret Rogerson another chance??? After all, I did enjoy her writing style and her world-building. If you’ve read A Sorcery of Thorns, PLEASE let me know what you thought of it in the comments)

20 thoughts on “Book Review: An Enchantment of Ravens by Margaret Rogerson (Most Disappointing Read of the Year)”