eARC provided by NetGalley in exchange for an honest review. 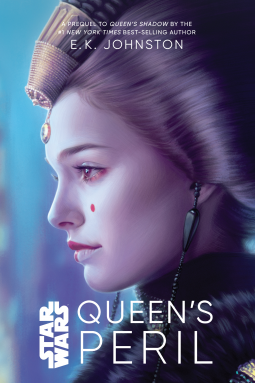 When fourteen-year-old Padmé Naberrie wins the election for Queen of Naboo, she adopts the name Amidala and leaves her family to the rule from the royal palace. To keep her safe and secure, she’ll need a group of skilled handmaidens who can be her assistants, confidantes, defenders, and decoys. Each girl is selected for her particular talents, but it will be up to Padmé to unite them as a group. When Naboo is invaded by forces of the Trade Federation, Queen Amidala and her handmaidens will face the greatest test–of themselves, and of each other.

I LOVE Star Wars, so I thought I would love this book, but alas, I did not. There was nothing remotely “bad” about it, but after finishing it, I feel like it was a very unnecessary read.

You see, Queen’s Peril tells the story of Padmé’s life as Queen of Naboo, BEFORE any of the events in The Phantom Menace take place… it’s a prequel of a prequel! But the problem is this: it doesn’t really add anything to Padmé’s story. I don’t know if it was the vague storytelling, the lack of action, or the bland characters we were introduced to, but something about this book just made it feel so (for lack of better words) empty.

Let’s talk about that first thing I mentioned, because that’s as good a place to start as any: vague storytelling. I was surprised by how indifferent I was about E.K. Johnston’s writing, because I’ve only heard great things about it! Maybe her other books are much stronger than this one, and having only read Queen’s Peril, I can’t immediately rule her out as an author I’m not interested in reading from again. However, there was something about her storytelling that made me feel like it was missing something. I just wanted more. I felt as though everything was written incredibly vaguely. Important events in the book weren’t well explained, and I find that pretty ironic considering it’s supposed to be a further fleshed out version of Padmé’s story.

Padmé herself read off as quite bland, which was such a bummer! I get that it’s hard to compare E.K. Johnston’s interpretation of her character to the talented Natalie Portman’s performance in the movies, but I just couldn’t help it. And it’s not like the author didn’t have the opportunity to really explore Padmé’s character and show a new aspect of her personality in her book. In this book, I was expecting to see a side of Padmé that wasn’t shown very much in the Star Wars films– the side of her that is young and inexperienced, yet eager to do anything for the good of her people. But I saw no such thing. It pains me to say this, but E.K. Johnston’s Padmé was so boring and watered down. I wanted to connect with her like I did in the movies, but I just couldn’t. I never understood her thought process and motives… Why was Padmé’s desire to be Queen of Naboo so strong in the first place? What aspects of her childhood sparked her passion to serve her planet as queen? These are questions I really wanted to see answered in this book, but, alas, they never were. We only get to see Padmé AS queen, not before she was crowned. Frankly, this was quite disappointing, as I would have enjoyed finding out more about Padmé’s motivations to become the Queen of Naboo before she was even elected.

Not only was Padmé incredibly boring to read, but all of the other supporting characters in the story were just as bland. This might just be the most disappointing thing of all, because the supporting characters were the reason I wanted to read this book in the first place! This book was supposed to give a voice to Padmé’s decoys/handmaids that appear briefly in The Phantom Menace. We didn’t get to see much of them in the movie, so I was looking forward to reading from their perspectives in Queen’s Peril. And while we DID get to see the events of the story through the handmaids’ eyes, their character development was simply non-existent. All of the handmaids’ personalities just blurred together, and if E.K. Johnston had switched one girl’s name with another’s, I highly doubt I would have noticed.

I think part of the problem is that Johnston focused all of the limited character development on Sabé, Padmé’s first handmaid and the decoy who gets assassinated in The Phantom Menace. To a certain degree, I understand why Johnston made Sabé her primary focus. She is, after all, the main decoy shown in the Star Wars films. But, with that being said, wasn’t the whole point of this book to tell the stories of the other handmaids as well? With no unique qualities to distinguish the girls from one another, the author’s attempt to do this fell short.

It didn’t help that the pacing of the story was agonizingly slow. This is a short book… It’s under 300 pages. Yet it was a battle to finish it! Fast pacing is one of the things I value most in a novel, so it’s no surprise that this book’s slow moving plot wasn’t for me.

Overall, Queen’s Peril was a huge let down. I knew going into this book that there was no way I would enjoy it as much as the Star Wars movies, but I didn’t expect it to be as disappointing as it was.

This book lacked everything I had hoped it would have, and as a huge Star Wars lover, it really pains me to say that!

I hope other Padmé fans enjoy this book more than I did!