I’ll start by saying that this post is long overdue.

Recently, I’ve realized just how little diversity there is in my reading, and I plan to fix that immediately. I don’t have the largest platform ever, but I have an audience nonetheless, and I need to do my part by speaking out about the horrifying racism and injustice that has been in our world not just in recent years, but for centuries.

As a white person, I’ve always felt like I should “stay in my lane” and avoid participating in the #blacklivesmatter movement simply because it’s “not my place”. But I can’t even begin to stress how wrong and dangerous that mindset is. For change to occur, we need EVERYONE to stand together and do everything possible to spread awareness about the terrifyingly racist things that have been going on for so long. White people like myself need to be aware of the privilege we have and recognize that there are so many struggles that we will never have to go through just because of our skin color. We need to join the fight for change. If you’re white, if you’re any race, really, and you’re not speaking up, you’re part of the problem. We can’t just keep ignoring all of the hate there is in the world, for if we do, how will it ever go away?

I want to do better. I want to look at the books I’ve read and not just see titles by caucasian authors exclusively. I want to see books written by disabled authors, people of ALL colors, LGBTQ+ authors, and anyone with a story to tell that is different from my own. So why not start by sharing 10 books on my TBR that are written by black authors?

I must shamefully admit that I have not made a conscious effort to diversify my reading, and it clearly shows if you take a quick look at any of my Goodreads shelves. So it’s time to change that.

Here are 10 books on my TBR written by black authors, all of which look and sound AMAZING!

1. A River of Royal Blood by Amanda Joy

Sixteen-year-old Eva is a princess, born with the magick of blood and marrow–a dark and terrible magick that hasn’t been seen for generations in the vibrant but fractured country of Myre. Its last known practitioner was Queen Raina, who toppled the native khimaer royalty and massacred thousands, including her own sister, eight generations ago, thus beginning the Rival Heir tradition. Living in Raina’s long and dark shadow, Eva must now face her older sister, Isa, in a battle to the death if she hopes to ascend to the Ivory Throne–because in the Queendom of Myre only the strongest, most ruthless rulers survive.

When Eva is attacked by an assassin just weeks before the battle with her sister, she discovers there is more to the attempt on her life than meets the eye–and it isn’t just her sister who wants to see her dead. As tensions escalate, Eva is forced to turn to a fey instructor of mythic proportions and a mysterious and handsome khimaer prince for help in growing her magick into something to fear. Because despite the love she still has for her sister, Eva will have to choose: Isa’s death or her own.

A River of Royal Blood is an enthralling debut set in a lush North African inspired fantasy world that subtly but powerfully challenges our notions of power, history, and identity.

2. A Song Below Water by Bethany C. Morrow

In a society determined to keep her under lock and key, Tavia must hide her siren powers.

Meanwhile, Effie is fighting her own family struggles, pitted against literal demons from her past. Together, these best friends must navigate through the perils of high school’s junior year.

But everything changes in the aftermath of a siren murder trial that rocks the nation, and Tavia accidentally lets out her magical voice at the worst possible moment.

Soon, nothing in Portland, Oregon, seems safe. To save themselves from drowning, it’s only Tavia and Effie’s unbreakable sisterhood that proves to be the strongest magic of all.

3. The Gilded Ones by Namina Forna

Sixteen-year-old Deka lives in fear and anticipation of the blood ceremony that will determine whether she will become a member of her village. Already different from everyone else because of her unnatural intuition, Deka prays for red blood so she can finally feel like she belongs.

But on the day of the ceremony, her blood runs gold, the color of impurity–and Deka knows she will face a consequence worse than death.

Then a mysterious woman comes to her with a choice: stay in the village and submit to her fate, or leave to fight for the emperor in an army of girls just like her. They are called alaki–near-immortals with rare gifts. And they are the only ones who can stop the empire’s greatest threat.

Knowing the dangers that lie ahead yet yearning for acceptance, Deka decides to leave the only life she’s ever known. But as she journeys to the capital to train for the biggest battle of her life, she will discover that the great walled city holds many surprises. Nothing and no one are quite what they seem to be–not even Deka herself. 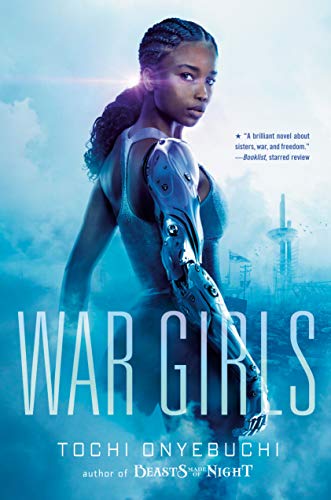 The year is 2172. Climate change and nuclear disasters have rendered much of earth unlivable. Only the lucky ones have escaped to space colonies in the sky.

In a war-torn Nigeria, battles are fought using flying, deadly mechs and soldiers are outfitted with bionic limbs and artificial organs meant to protect them from the harsh, radiation-heavy climate. Across the nation, as the years-long civil war wages on, survival becomes the only way of life.

Two sisters, Onyii and Ify, dream of more. Their lives have been marked by violence and political unrest. Still, they dream of peace, of hope, of a future together.

And they’re willing to fight an entire war to get there.

5. Opposite of Always by Justin A. Reynolds

When Jack and Kate meet at a party, bonding until sunrise over their mutual love of Froot Loops and their favorite flicks, Jack knows he’s falling—hard. Soon she’s meeting his best friends, Jillian and Franny, and Kate wins them over as easily as she did Jack.

But then Kate dies. And their story should end there.

Yet Kate’s death sends Jack back to the beginning, the moment they first meet, and Kate’s there again. Healthy, happy, and charming as ever. Jack isn’t sure if he’s losing his mind.

Still, if he has a chance to prevent Kate’s death, he’ll take it. Even if that means believing in time travel. However, Jack will learn that his actions are not without consequences. And when one choice turns deadly for someone else close to him, he has to figure out what he’s willing to do to save the people he loves.

6. Kingdom of Souls by Rena Barron

Heir to two lines of powerful witchdoctors, Arrah yearns for magic of her own. Yet she fails at bone magic, fails to call upon her ancestors, and fails to live up to her family’s legacy. Under the disapproving eye of her mother, the Kingdom’s most powerful priestess and seer, she fears she may never be good enough.

But when the Kingdom’s children begin to disappear, Arrah is desperate enough to turn to a forbidden, dangerous ritual. If she has no magic of her own, she’ll have to buy it―by trading away years of her own life.

Arrah’s borrowed power reveals a nightmarish betrayal, and on its heels, a rising tide of darkness that threatens to consume her and all those she loves. She must race to unravel a twisted and deadly scheme… before the fight costs more than she can afford.

7. Fate of Flames by Sarah Raughly

Years ago, everything changed.

Phantoms, massive beasts of nightmare, began terrorizing the world. At the same time, four girls—the Effigies—appeared, each with a unique power to control a classical element. Since then, they have protected the world from the Phantoms. At the death of one Effigy, another is chosen, pulled from her normal life into the never-ending battle.

When Maia unexpectedly becomes the next Fire Effigy, she resists her new calling. A quiet girl with few friends and almost no family, she was much happier to admire the Effigies from afar. Never did she imagine having to master her ability to control fire, to protect innocent citizens from the Phantoms, or to try bringing together the other three Effigies.

But with the arrival of the mysterious Saul—a man who seems to be able to control the Phantoms using the same cosmic power previously only granted to four girls at a time—Maia and the other Effigies must learn to work together in a world where their celebrity status is more important than their heroism.

But the secrets Saul has, and the power he possesses, might be more than even they can handle…

Since she was seven years old, Yvonne has had her trusted violin to keep her company, especially in those lonely days after her mother walked out on their family. But with graduation just around the corner, she is forced to face the hard truth that she just might not be good enough to attend a conservatory after high school.

Full of doubt about her future, and increasingly frustrated by her strained relationship with her successful but emotionally closed-off father, Yvonne meets a street musician and fellow violinist who understands her struggle. He’s mysterious, charming, and different from Warren, the familiar and reliable boy who has her heart. But when Yvonne becomes unexpectedly pregnant, she has to make the most difficult decision yet about her future.

9. Oh My Gods by Alexandra Shappard

Life as a half-mortal teenager should be epic. But, for Helen Thomas, it’s tragic . She’s just moved in with her dorky dad and self-absorbed older siblings – who happen to be the ancient Greek gods, living incognito in London! Between keeping her family’s true identities secret, trying to impress her new friends, and meeting an actually cute boy, Helen’s stress levels are higher than Mount Olympus. She needs to rein in her chaotic family before they blow their cover AND her chances at a half-normal social life. Or is Helen fated for an embarrassment of mythical proportions?

10. Wrong in All the Right Ways by Tiffany Brownlee

Emma’s life has always gone according to her very careful plans. But things take a turn toward the unexpected when she falls in love for the first time with the one person in the world who’s off-limits: her new foster brother, the gorgeous and tormented Dylan McAndrews.

Meanwhile, Emma’s AP English class is reading Wuthering Heights, and she’s been assigned to echo Emily Bronte’s style in an epistolary format. With irrepressible feelings and no one to confide in, she’s got a lot to write about. Distraught by the escalating intensity of their mutual attraction, Emma and Dylan try to constrain their romance to the page―for fear of threatening Dylan’s chances at being adopted into a loving home. But the strength of first love is all-consuming, and they soon get enveloped in a passionate, secretive relationship with a very uncertain outcome.

How will you be contributing to the #blacklivesmatter movement?